Co-Parenting: A Work in Progress 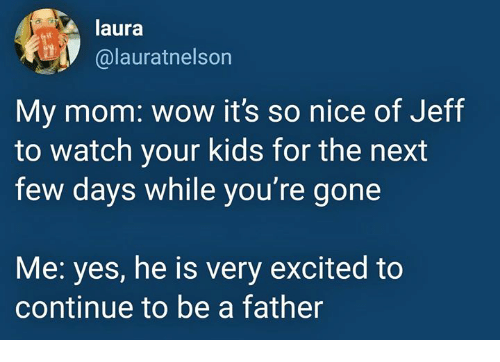 A few weeks ago, I went on an out of town trip for a day for a company party. Left Saturday morning and was back Sunday evening… okay… 2 days I guess. Weeks before I left and even days after I got back, the main thing I got asked was “What about The Boy?” Actually aside from “What are you going to wear?” that was the only question I was even asked. He stayed with his dad & this is where things got annoying.

“Oh how lucky it fell on his weekend! You didn’t have to ask him to babysit.”

He’s not babysitting – he’s being a f*cking father.

FIRST OF ALL… I don’t even know where to start. Okay, I’ll start here: A PARENT DOESN’T BABYSIT THEIR OWN CHILD! I was annoyed for so many things… his weekend…babysit... it’s so freaking stupid. I’m annoyed that the response to my overnight trip was actually valid. If it hadn’t landed on his dad’s weekend, I would have had to ask him to switch weekends or ask him the big favor of watching our son. Watching. Our. Son. But this is the type of co-parenting relationship we have. If anything goes above and beyond his weekends, it’s a favor.

I’m a parent 24/7.  I take care of meals, laundry, homework and make sure he takes a shower. I’m the one to send him off to school, make sure he goes to tutoring and if he’s sick, I’m the one who has to leave work to take him to the doctor. It’s me that makes him to wear his glasses ( from the doctor I took him to for his prescription and then paid for). This Momma right here makes sure his clothes fit him and he’s fed all the pets. I keep up with school functions and karate and art shows and even movies  he wants to see. ME. I do all that. Whether or not he’s with me.

When he’s not with me, I’m still texting and checking up on him to make sure his anxiety is under control. I’m making sure It’s all me.

Dad  is only dad on “his weekend”: part-time. There’s almost never a phone call or a text to our boy from him between those weekends. Never has he ever volunteered to take care of one of his appointments for me so I don’t miss work. He’s never attended a parent/teacher conference even though I’ve let him know when they are.  He doesn’t care to understand the challenges our  son faces with his dyslexia and anxiety.  He’s been invited to those meetings and classes. He didn’t want to hear what the doctor had to say about the relationship between The Boy’s ADHD and depression/anxiety.

I’ve attempted to keep him involved in all of these goings on in  his life. Dad is only Dad on his weekend.  That’s  just the way it is. That’s the way it has always been. Frankly, it pisses me off. Asking him to partake in more than the bare minimum is the equivalent of doing me a favor. It really doesn’t phase him that this is just what parents do.

Don’t get me wrong, there are some things he does go above for. He’ll text me for a list of school supplies he needs for the upcoming year and his clothing size. He’ll send him home with these things – but… BUT… it has to be his idea. I cannot ask for these things because then it’s a big fat NOPE from him.

Why can’t we be like Chris and Anna? Jen and Ben? Channing and Jenna? Do you have to be filthy rich to be in co-parental bliss? What the actual EFF? Why can’t we make that work? I feel like I’m always swallowing my pride to keep the peace between us and he’s just freaking prideful with zero sway. This is like 12 years of frustration built up at this point, okay? I’m at my limit with the gross imbalance. I’m tired of asking “favors” which are actually just asking him to participate and be a F*CKING dad on more than just his weekend.

Is peaceful co-parenting even possible anymore?

That Time I Broke My Dog: Pet Mom Life